I started programming in February 1982.

As a programmer I had to think which system to target for my programs so I decided to own both the computers and to learn both the systems.

The ZX Spectrum (I owned the 48K version) was the one that I found more flexible and more “magical”.

One of my first application was a database manager (thinking of today’s technology I am ashamed of even using that name….) called Superbase. What was so special about this program to be remembered?

The ZX Spectrum had a resolution of 32 columns. I programmed a program that doubled the number of columns available on video to achieve 64 columns on screen. The program also allowed to structured the record and utilize all of the 48 kilobytes of memory available. The program had a very little footprint and saved itself with the data to speed up the archival. Also the search was quite fast… and all that happened in 1986… almost 20 years ago.

During that period a then-famous magazine for the ZX Spectrum started giving the opportunity to small developers  to contribute applications to their magazine promising to pay up to a whopping 1,000,000 lire (it was a lot of money for a kid back then). I sent them my program and, I got it published in December 1987 receiving 200,000 lire. 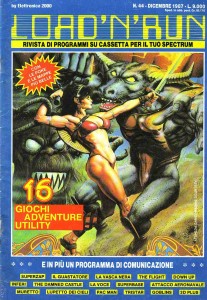 After so long, these memories came back to my life when I found on the internet a site published almost all the editions of the magazine and the programs… including mine.

What a nice feeling: 20 years immediately vanished, with those memories coming back.

This site uses Akismet to reduce spam. Learn how your comment data is processed.